In this article, we present Bhramari Pranayama. The name is derived from the word for the black Indian bumble bee, Bhramari ; it describes the characteristic humming sound which is produced while exhaling in this breathing exercise.

The adjective bhramarin can also mean “sweet as honey” in Sanskrit or “that which produces ecstasy”. Bhramari has an immediate relaxing effect on the brain. If it is practised some minutes every day it can reduce mental tension and lower high blood pressure. 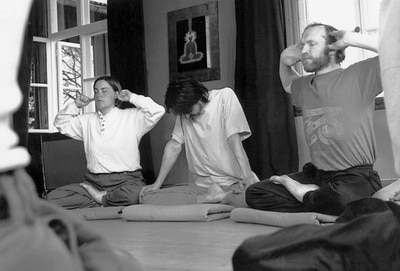 “With regular practice of this pranayama (Bhramari) bliss arises in the yogi’s heart”. (Hatha Yoga Pradipika)

Here, we will describe two variations of Bhramari. First the Indian, which is most well known: Sit in a meditation pose with a straight back. Place the hands on the knees and close the eyes. Inhale deeply through the nose and hold the breath. Lean a little forward so you are supported by straight arms, placing the weight on the knees (see the picture). Now, bend the head so the chin touches the chest (chin lock). Pull up the pelvic floor, that is, the sexual organs, the perineum and the anal muscles together (root lock). Hold the breath a while in the pose. Release the contractions, raise the head, relax the shoulders and sit upright. Close the ears by closing the small flaps of the ears with the index or middle finger. The elbows are held out to the side so that the chest is open. Then the exhalation takes place through the nose, while the mouth is closed (but the jaw is held so relaxed that the teeth don’t touch each other). A smooth, deep and relatively strong humming sound, like that of a bumble bee, is produced during the exhalation.

Become one with the sound vibrations and let them fill your whole head, maybe even the whole body. After the exhalation, let the hands rest on the knees and breathe normally.

The chin lock (Jalandhara Bandha) and the root lock (Mula Bandha) are also used with a number of other breathing exercises to strengthen the practice. They stimulate the finer energy flows (nadi) and influence, simultaneously, the blood pressure, the heartbeat and the blood supply in certain parts of the brain as well as maintaining a relaxed state in the brain.

Another variation of Bhramari comes from Tibet. Warm the palms of the hands by rubbing them briskly together. As you breathe in, let the warm palms glide up over the face, from the neck, over the cheeks and the forehead and up to the crown. The elbows now point out to the sides. On the exhalation, make the same deep sound as has been described above while the hands move down to cover the ears, which are first covered by the root of the hands, then by the palms and finally by the middle fingers – and on down over the neck until the palms meet in front of the chest.

Do this nine times.

A more Harmonious Pregnancy with Bhramari

On the exhalation, the brain is influenced by the vibrations of the humming sound. According to the Indian doctor, Dr. Singh, the vibrations influence different parts of the brain (e.g. the reticular formation) which eliminates anxiety and promotes a calm state of mind. In the same way, the hypothalamus and the pituitary gland are stimulated, according to Dr Singh. They are situated in the middle of the brain and are responsible for the control of the autonomous nervous system and the hormone system in the human body. Or put in another way, through this practice, you can find the door to the whole body’s wellbeing.

Bhramari provided the basis for a clinical research project which was carried out in ’93 by Monghyr Hospital, India, in co-operation with Bihar School of Yoga. Dr. Singh examined 448 pregnant women over one year. All had the same treatment (medical check-ups, dietary advice, pre-birth instruction etc.) – with one exception: 112 of the women practised Bhramari 1- 2 times a day for 5 to 10 minutes during the whole pregnancy and continued to do so for the first phase of the actual birth. The report produced the following results for “the bhramari group”.

These results show that, during pregnancy, there was less worry and stress as a result of the regular practice of Bhramari. The women’s hormone balance was better regulated, which promoted the birth of healthy children.

“If I work in a concentrated way with music over a long period of time and need to “relax the ears”, then Bhramari is a good practice,” says Turiya, a saxophone player.

Through Bhramari, you become sensitive to finer vibrations. It is, therefore, a valuable tool for musicians to develop their ear for music and musicality. Bhramari is part of the classical teaching of music in India.

If you want to get into Nada Yoga and experience the inner sounds, then a regular practice of Bhramari is important.

After the practice, remain sitting still with closed eyes in one of the poses described in the Nada Yoga text and listen to the inner sounds.

Yogic breathing exercises (pranayama) are often described as a key to concentration and creativity. There is nothing surprising in that. Hardly any other therapeutic system, if you can call pranayama that, has such an immediate influence on the nervous system and therefore also on the mind.

And the name indicates this; prana means energy in Sanskrit and yama, to control, to be conscious of. Through regular practice of breathing exercises the finer psychic energy (prana) is awakened. In a harmonious way, blockages are released. When the energy flows unhindered, you can let go of the limiting states of restlessness, lack of energy or confusion. Pranayama is a powerful tool to help the mind rest as well as being a good preparation for meditation.

Over the last few decades, medical science has done a lot of research on the effects of pranayama. The interest is world-wide and the results of the many studies made in Turkey, India, Germany and the USA are: Improved ability to relax, a reduction in stress, normalising of blood pressure – both for high and low conditions, increased vitality, a larger lung capacity, balancing of the relationship between the two brain halves and good results as a form of asthma therapy.

Studies have even shown that humming, singing, mantra chanting and especially Bhramari Pranayama, (the Bumble Bee) increase the production of Nitric Oxide (NO)  in the nose, and thus the healing effect.