– on educating teachers at the Scandinavian Yoga and Meditation School

“A man without manly courage,
a woman without womanly grace,
a child without a child’s simplicity,
an infant without an infant’s innocence,
a lover without willing sacrifice,
a worshipper without the ideal of God,
a giver without great modesty are like a king without a kingdom… 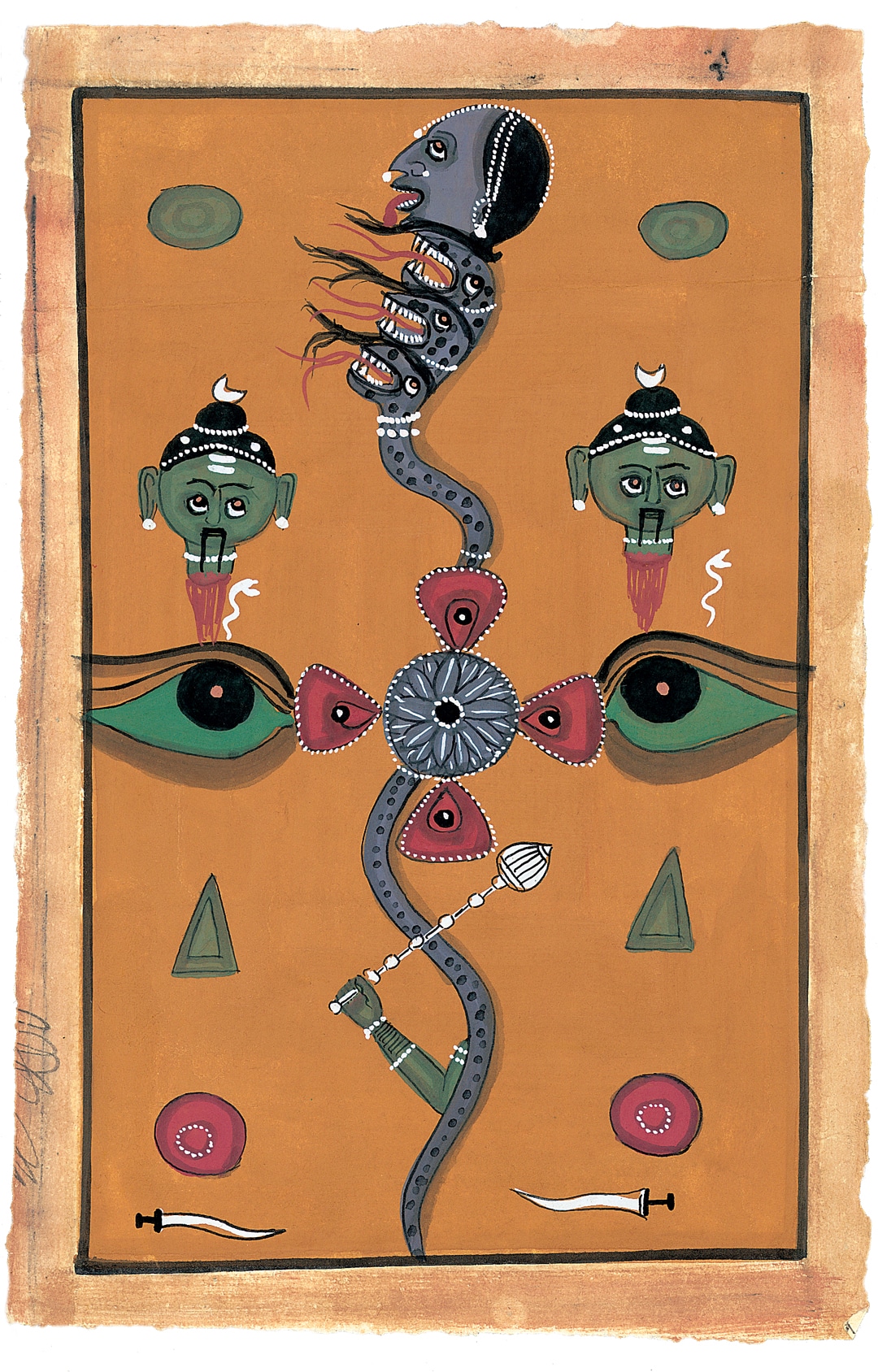 Can yoga teachers be afraid of standing on their head? Can they be scared of pranayama (yogic breathing exercises) or meditation? No, of course not, provided they use these methods themselves – and also have their experiences confirmed by scientific research.

Unfortunately, we cannot do anything about superficiality, fear and ignorance. However, it is damaging to the reputation, name and quality of yoga that certain teacher educations are short and sometimes even blended with all sorts of other things that diffuse the intensity and concentration. To mix unrelated material into a yoga teacher education takes up space and time and blurs the view of the inherent possibilities of the yoga tradition, which after all, is based on thousands of years of testing and experience.

Without a firm basis, insufficiently educated teachers have the tendency to dilute yoga so that it is unrecognisable and without the desired effects. Quite often, they themselves stop teaching after only a few years.

Some sad examples out of many

“What you don’t know, or what you know through theory alone – that you fear.”
(Swami Janakananda)

Germany: Some of our students have told us that their previous yoga teachers refused to teach them the headstand and told negative but unsubstantiated stories about pranayama (breathing exercises).

Denmark: There is a little group of yoga teachers who talk about ‘Safe Yoga’; they pride themselves on not teaching ‘dangerous’ (their word) yoga practices. Some, for instance, have mentioned nose cleansing, Neti, which today is recommended by many private doctors and is used for allergies in several major hospitals in Sweden. At the Medical College, Hannover, in an extensive study on soldiers in the German army, Neti was found to be “an excellent preventive remedy against colds” (Prof. Thomas Schmidt).

USA: We have received letters from many people who are having difficulties finding a yoga teacher of quality in the area where they live. They ask us if we know of a yoga teacher there, who teaches along similar lines to Swami Satyananda and Swami Janakananda. All they have been able to find is some kind of yoga gymnastics/aerobics/fitness or yoga that cannot be done, unless you have different kinds of cushions, furniture and tools (also see the editorial, Yoga–Instructor or Guide?).

Sweden: In one of the largest Swedish cities, some of our students have complained of the incompetent teaching they were exposed to by teachers who apparently had only a superficial education and no real personal practice or training. As a result, the students were disappointed with yoga and lost interest. Some of them gave it a second try, however, came to one of our courses and felt the difference.

As Swami Janakananda puts it:

Franz, one of our senior yoga teachers:

“A yoga teacher education of 1-4 months seems unrealistic. What kind of background do those who follow this kind of education have? If they have never done yoga before or only done a little, it is totally inadequate. And even though they may have a great deal of experience of yoga, there is the question of whether they can be prepared to teach others in such a short time. Does the ‘teacher’ from this type of ‘diploma education’ have the possibility of a lineage of teachers to fall back upon for advice in their work with other human beings? How are they tested under adverse teaching circumstances? Do they, as compensation to real guidance, form “coffee or tea” clubs, where limiting fear and superstition grow?”

The late Swami Vishnudevananda, in an open letter to yoga teachers:

“This is the tradition of yoga, a great spiritual tradition in danger of being polluted by the commercial concerns of those individuals wishing to market yoga by forming professional yoga associations… The “3 year course” [formed by a national association in a European country] involves two days of five hours every two weeks, equalling a total teacher/student involvement of 360 hours in three years – if the student and teacher come for all the classes. … The “3 year course” title fools the public by making a false comparison. Actually the classes are held only every second weekend. This dispersed instruction does not demand the regulated and disciplined life of yoga, nor does it offer the implied professional training of three years in university, where one must work hard every day in order to gain professional certification. … The attitude of such yoga associations can only be understood in terms of commercial self-interest. They are not founded on the wisdom of the guru-disciple lineage, the ancient yoga tradition in which the disciple’s spiritual wealth is inherited from the teacher.“ 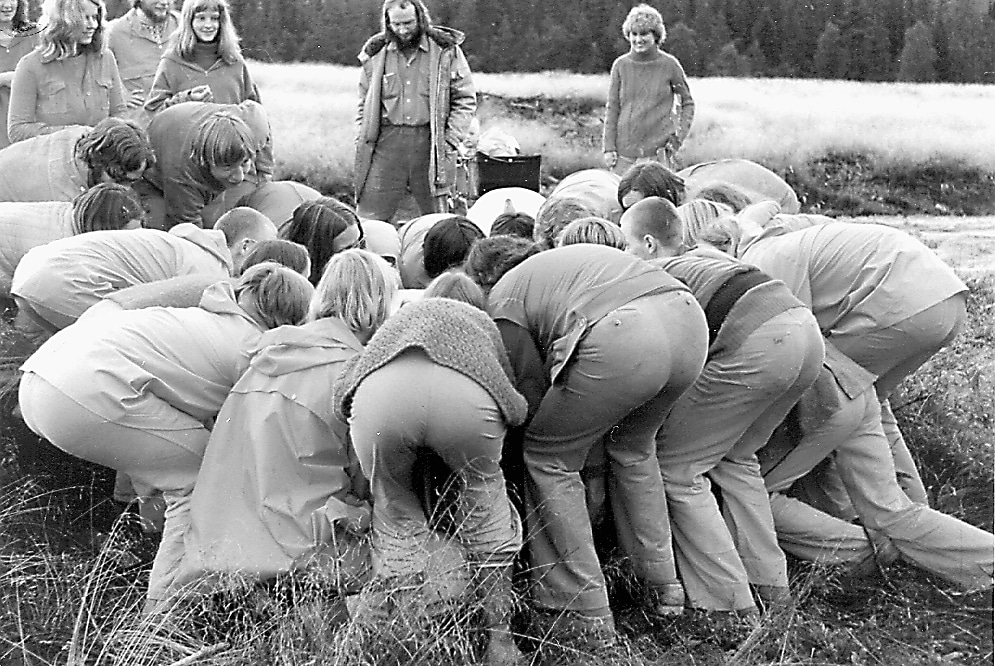 Even the largest boulder can be moved, when lifting together. Below, yoga teachers in a relaxed moment in the country at Håå.

It is our responsibility as yoga teachers to keep the standard of the yoga teacher education high.

However, it is not a question of producing as many yoga teachers as possible. That might even strangle the tradition. We can only hope that those who teach on such a small basis, out of fear of the unknown or jealousy of those who went ahead, one day do not prevent the real yogis carrying on the undiluted tradition in the future.

It is a question of quality and genuineness, of what each yoga teacher is able to give his or her students. It requires not only facts, theory and philosophy, but time, dedication and patience.

“This is not about proving one’s capability
but of remaining in contact with oneself
and from oneself
being together with others.”
(Swami Janakananda) 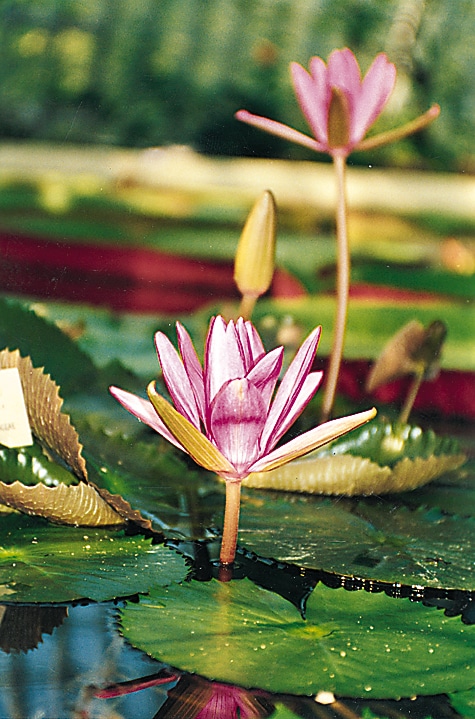 Good yoga teachers are not ‘good’ because they are ambitious or clever. They know the methods of yoga by experience and have matured through personal training and growth. That is true, but it is the realisation of the attitude of yoga that gives depth.

They are self-reliant, but seek the guidance of the teacher or guru to cope with the illusions of life – they follow an unbroken tradition. He or she is on the way to wisdom.

This person has dropped many masks and much role playing. He (or she) stands ‘naked’ in front of the students, has acquired the psychic and spiritual dimensions needed to teach the methods of yoga and meditation. Additionally, this teacher has become a good medium with enough sensitivity to pick up the needs of others and inspire them to self-realisation, rather than being a preacher and indoctrinating people in any mythology whatsoever.

Such a teacher can tease or trick his students out of self-involvement, depressions or preconceptions – helping them on their way by pricking holes in their balloons of pride, in their bubbles of idealism and enthusiasm.

No one is perfect – or maybe we all are, in our diversity – and we do not see perfectionism as an aim in itself, but the further you have gone yourself, the further you can lead your students.

In discussing the yoga teacher education, we are faced with a dilemma. On the one hand, we want to share the wonderful tools of yoga with as many as possible. On the other hand, we must ask how fast, short, superficial or ‘safe’ can a yoga teacher education be, before it becomes irresponsible, and turns its back on thousands of years of tradition and the experience of countless generations? In that case, such ‘training’ should be given another label, not the one of yoga.