by Tine Elmer and Mira

The headstand (Shirsasana) is considered the most important of all yoga poses. As long as you haven’t completely explored this pose, you will not know the full effect of physical yoga. However, this is not a pose you begin with. In yoga, you progress step by step. When you learn the headstand, you first prepare with easy exercises to get to know your body thoroughly.

But don’t think it is a pose for a select few. Practically everybody can learn to stand on their head. Many people, young as well as old, do it every day.

One of our yoga teachers, (68 years old when this was written) who had taken up yoga ten years earlier, stands on his head every day “as soon as I have finished my shower, to get the morning stiffness out of my body”.

In the documentary film, The Young Old, by the Danish director Jørgen Roos, a man in his eighties tells how he has stood on his head regularly all his life. According to him, that is why he has never had a headache. India’s first Prime Minister, Nehru, stood on his head every day for a quarter of an hour, and “that among other things inspired me to start doing yoga”, says Swami Janakananda.

As you get used to standing on your head, you begin to relax in the pose. Then you will be able to stand for a longer time and get a deeper effect. Begin with half a minute to one minute and then gradually increase the time. You may stand on the head as long as you like, up to half an hour, but around five minutes is more usual.

Research on the headstand…

At The Third Clinic of Krakow in Poland, research was made by Pasek et al into the composition and quality of the blood of a man who stood on his head for thirty minutes. It turned out that the intake of air in the lungs was considerably reduced (3 liters per min. as compared to the normal 8 liters per min.) and his breathing became much slower (2 breaths per min.). The assimilation of oxygen increased by 33% and the air exhaled contained 10% less oxygen. To put it simply: When relaxing completely in the headstand, even though the body breathes slower, the blood absorbs considerably more oxygen, and consequently, so does the brain and inner organs. Furthermore, the research showed that disturbing mental and emotional states, anxiety and breathing difficulties gradually disappeared. Mental balance and physical well-being was the outcome for those who used the pose regularly.

… and your own practice 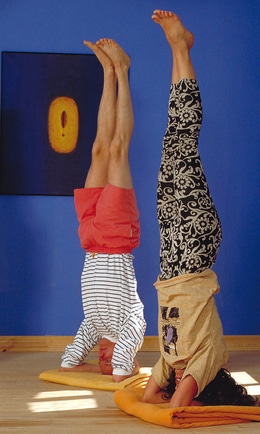 This is not a practical guide to the headstand. You should learn the pose from a competent yoga teacher and get to know how to use it. For instance, you should not stand on your head if your blood pressure is too high; but if your body is prepared through a series of other yoga poses, the same precautions do not apply.When you stand on your head, more blood flows to the head than in any other position. This provides nourishment and oxygen to cells and tissues. Clarity and concentration are enhanced, which is useful for studies and other mental tasks. For the yogi, this pose is of particular importance as a preparation for meditation. The headstand is beneficial not only while you are doing it but also for a certain time afterwards. One of our pupils, an accountant, began to use the pose in the evening before going to bed. He said that he could clearly feel the effect of the pose in the form of increased energy and clarity all through the following morning.

All parts of the body are vitalised because of the stimulated blood circulation and the increased content of oxygen in the blood. The heart is relieved since it can now provide oxygen to the brain with less exertion, and the blood from the body flows back to the heart by itself. This relieves the valves of the veins which are ordinarily exerted when the blood from the body flows back into the heart. In this way, varicose veins are prevented. The abdomen, the bowels, and other inner organs are relaxed by hanging upside down.

According to yoga literature, the headstand can prevent, relieve or remedy: hernia, infertility, various diseases of the abdomen, digestive complaints such as constipation, insomnia, headaches and diseases of the ears, nose and throat. The pose strengthens the nervous system and is a remedy for failing energy.

The glands in the upper part of the body, in the neck and head are stimulated, in particular the thyroid and the pineal glands. The headstand may remedy nervously conditioned asthma and is good for hay-fever. For hay-fever, the pose is used after neti and before breathing exercises.

The experience of the headstand

The headstand is one of the classical yoga poses in which the effect may be increased by concentration on various places in the body, which are energy centres. In this pose, the point of concentration is the crown of the head, sahasrara chakra.

When coming out of the headstand, you stand up immediately and relax with your eyes closed. Afterwards, you stretch your body upwards, standing on your toes with your arms above your head, hands folded, palms upwards; this is the palm, the counter pose to the headstand.

Many of our students are using headstand every day, which helps them make a difference in their lives and in society.

A special story about Chris: I stand on my head for my health

Letter from a reader: Nose-cleansing and Headstand