“As a child, I often had bronchitis together with asthma and since then I have rarely been able to really breathe through the nose. The day I learned nose cleansing, I was able again for the first time to breathe completely freely through the nose.” (40 year old course-participant from Oslo, Norway)

Why cleanse the nose? 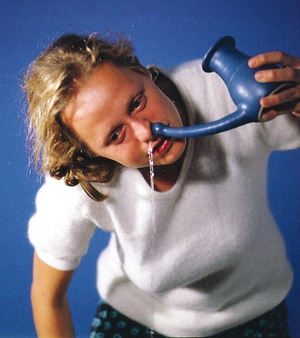 To cleanse the nose with lukewarm salt water is a yoga technique, the benefit of which is presently being discovered by still more people. This article deals with its origins, its possible applications and other things worth knowing.

Nose cleansing, also called neti, is easy to do. Everybody can learn it. The few directions given at the end of this article, though, should be followed carefully.

Neti refreshes, and the nose becomes pleasantly open. The entire nose area is relaxed and cleaned from inside: Mucus, dust and dirt, even pollen and allergy provoking particles are gently rinsed out. This simple method can also help with many ailments or illnesses, e.g. cold, dry mucus membranes, allergy and asthma. 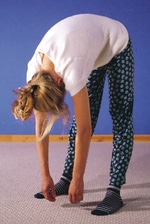 In the yoga tradition, neti is one of the so-called Hatha Yoga methods, that in various ways clean the body. There are similar methods for the eyes, stomach and intestines. Neti exists in different variations, but the most gentle and pleasant way is probably the one where, with the help of a special pot (see picture), you pour salt water through the nose. Corresponding methods, in more or less complete forms, can be traced to the most diverse cultures.

With us here in Scandinavia, nose cleansing is known as an old household remedy against colds and infections. Old fishermen tell that they have avoided colds throughout their lives by sniffing salt water from the hand or a small bowl and spitting it out of the mouth again. Similar descriptions of how people take advantage of the sea water’s curative and disinfecting abilities, one finds, amongst other places, in France, Germany, Finland and even Jamaica. With our senior citizen groups in Copenhagen, many of the participants still remember that in their childhood, nose cleansing was regularly used in the home against colds. At the turn of the 20th century, one could even, at many Scandinavian pharmacies, buy nose cleansing pots of glass.

The following story originates from south Sweden: On a military base, they had a large container full of salt water. At the bottom of the container, there was a small tap with a rubber hose. If the soldiers felt a cold coming on, they would put the hose to their nostril and let the water run through. That was the most effective means they knew against colds.

For a long time, it seemed that this old technique would be forgotten in favour of modern medicine. When the first yoga teachers from our schools, in 1970, came from India to Scandinavia with neti pots they were almost unknown and many saw them as an exotic curiosity. But today, nose cleansing has become a popular and established method – many see it as natural body hygiene, an economical and, above all, healthier alternative to medicaments such as nasal drops and sprays. Especially in Sweden, the doctors also show a great interest: “We recommend nose cleansing against dry mucus membranes, to people with allergies and when working in dusty environments”, says chief physician, Dr. Claude Laurent, from the ear, nose and throat clinic in Falun in Sweden. He and his colleague, Dr. Matström from Huddinge Hospital in Stockholm, are two out of many doctors who recommend neti to their patients.

At the Scandinavian Yoga and Meditation School, we teach nose cleansing on all of our yoga courses, and during the period 1973 – 1993 approximately 75.000 people in Northern Europe have learnt nose cleansing with us. Now and again, one hears the question: “Why on earth should we clean the nose?!” But when people have tried neti, they are surprised about how easy and pleasant it is, and above all, what effect it has. Many continue to use neti daily at home, and return and tell about how it helps them. 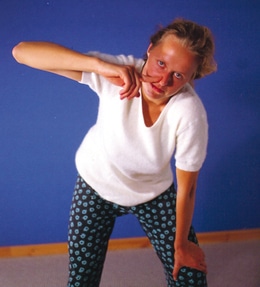 The spectrum of experiences is broad: There are those who simply recount that they feel fresher, more awake and clear in the head after having cleansed the nose. They, first of all, emphasise the relaxing effect that can even relieve or cure different forms of headaches, for instance migraine.

With others, nose cleansing has helped against physical ailments or even serious illnesses. A 19-year old student reports: “I suffered from chronic sinusitis for years, with headaches, tiredness etc. Medicine didn’t help any more, and an operation was necessary. After I had learnt nose cleansing, together with a few breathing exercises, I used it daily. The operation became unnecessary, and today I am completely healthy”. With sinusitis especially, we receive a lot of feedback on the beneficial effects of neti. To receive the best results with this, neti should be performed in conjunction with certain breathing exercises. For this, though, it is necessary to be guided by a competent yoga teacher.

People with allergies also have positive experiences. It improves their condition when they rinse their nose during the pollen season. A woman from Stockholm in Sweden related that, since her childhood, she has suffered terribly from hay fever – each spring with the usual symptoms: swollen eyes that ran with tears and a completely blocked nose. She has no problems today, even at the height of the pollen season. She cleans her nose daily, several times if it is necessary.

What does physiology say?

What actually happens as a result of the salt-water bath is described by professor Paul Stoksted from Odense, Denmark: “In the sinuses and mucus membranes microscopic hairs are found, the so called cilia, that all vibrate in the same direction. Under a microscope, they resemble a cornfield swaying in the wind. The cilia are coated with a layer of mucus that catch dust, bacteria, pollen and white blood corpuscles. Through their motion, the mucus membrane acts as a conveyor belt, transporting the mucus and caught particles through the nose, down the throat and further on to the stomach”. Therefore, it is not only the mucus membranes in the nose that are stimulated by the use of neti, but also the rest of the air passage all the way down to the lungs, which is especially beneficial to smokers. Actually, nose cleansing activates all the mucus membranes in the body, also in the stomach and in the eyes. Professor Paul Stoksted continues: “The movement of the cilia hairs can be paralysed by virus and allergy provoking substances, and also when it dries out, the mucus becomes tough and crusty and looses its function. Cleansing with salt water keeps the mucus moist, the cilia hairs are stimulated and encrustations, dust as well as allergy provoking substances are removed”. If one has problems with dry mucus membranes, which is often the case with dry air in offices and other places, one may add a drop of almond oil to the water (or another plant oil).

Regular use of neti can also prevent colds, as it changes the pH-value towards alkaline. When the mucus membrane is too acidic, that is to say, when the pH-value is too low, the virus can survive and become attached to the mucus membrane and thus develop into an infection. Contrarily, if the pH-value is higher, the virus dies. “Many people can even experience sinusitis-like symptoms when the orifices close for other reasons such as stress reactions or overwork”, says Dr. Uhre. With this background, it is also clear why neti can consistently relieve psychosomatic ailments such as asthma since during asthma attacks the mucus membranes become swollen, and make breathing difficult when the air passage is obstructed by mucus.

The effects of neti are, as you see, very comprehensive and can be employed for many purposes. It is up to each individual how one would use it: As a daily routine together with brushing the teeth, as “medicine” when one has use for it, as help when one wants to stop smoking, together with the breathing exercises of yoga, or simply just when one feels like being refreshed…

How to do Nose Cleansing – Neti

We are pleased to present you with our Yogi’s Nosebuddy. Read about how to use it and why cleanse your nose. You can also order neti pots directly from our shop.