I was 15 years old and at the local swimming baths, when I saw, for the first time, a living human being sitting in the Lotus pose. A young woman, quickly and with ease, placed her legs over each other. I was filled with awe and surprise. Although I had already read about it, I was convinced, up to that very moment, that the Lotus pose was reserved for a few people only – and hardly possible for ordinary people. 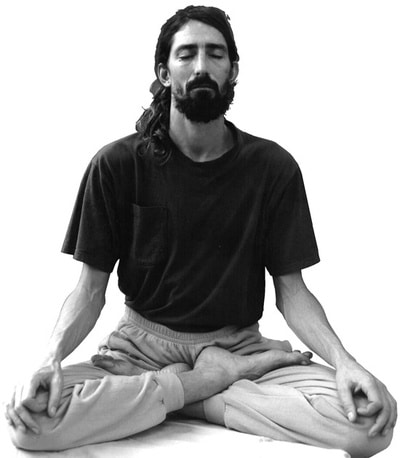 Together with the Headstand, the Lotus pose probably is the best known yoga pose. In one way or another, most people have either heard or read about it. The legs are crossed in such a way that the feet are placed on the thighs, the hands are resting on the knees and you sit with a straight spine. Padmasana, which the Lotus pose is called in Sanskrit, is one of the classical meditation poses.

Why a meditation pose?

When you want to meditate, it is important to be able to sit still, upright and relaxed for a certain length of time. When the body is held motionless and stable, it becomes relaxed and the mind begins to calm down which is a precondition for going deeper.

Naturally, it is not mandatory to sit in the Lotus pose in order to meditate. It is important, however, that you can sit still for a period, without having to worry about the body. To achieve that, there are also more simple poses which anyone (including the untrained) can use without difficulty. In some meditations, e. g. when you begin practising Inner Silence, you can also sit on a high-backed chair or even in an armchair as long as you sit comfortably and upright. On the other hand, when you want to go deeper (in Inner Silence) or work with your psychic energy in meditations like Ajapa Jap or Kriya Yoga, it is necessary to learn one of the genuine meditation poses since the posture has an effect in itself. 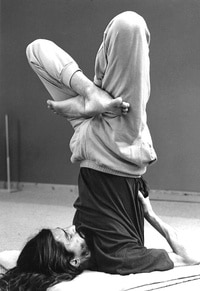 Once having learned to master the Lotus pose, you have the benefit of being able to sit motionless and effortless for long periods of time. In other poses, like the normal cross-legged position, the upper body easily sags and becomes tired. In a real meditation pose like the Lotus pose on the other hand, one can learn to avoid restlessness and muscular tensions. It could be argued that one could lie much more comfortably on the back in the dead-still pose (Savasana) as one does in different types of relaxation. Relaxation and calmness in the body, however, is only a small part of the overall effect of the Lotus pose.

In the spinal cord, the passages of the central nervous system connect the brain with the rest of the body. All parts of the body are controlled through these passages. The upright and undisturbed position of the spine in Padmasana is important in order for the nerve impulses to flow freely during meditation.

These nerve paths, together with the brain, are surrounded by a protective membrane within which the so called cerebrospinal fluid flows. This fluid nurtures the nerve endings and the brain – the Lotus pose provides an optimal condition for its flow. (A chiropractor will in many cases treat diseases by removing blockages in the flow of the cerebrospinal fluid.)

When we go on to a finer dimension, to the psychic energy, then, in the spinal cord, we find the energy flows Ida, Pingala and Shushumna, the three most important passages in the network of our psychic energy. They should not be mistaken for our nervous system, although closely connected with it. Today’s science confirms that man only makes use of a fraction of his brain capacity. Within the yoga tradition, however, the breathing exercises and meditations (i.e. Kriya Yoga) are known to stimulate and awaken the energy and, through its flows, awaken the dormant parts of the brain. It is therefore crucial to use a real meditation pose – it ensures that the energy generated during the meditation is directed into its proper paths and that a harmonic expansion of consciousness is taking place.

The classical yoga script, Gheranda Samhita, names the Lotus pose “the destroyer of all diseases” – and it surely has a good number of healing effects. 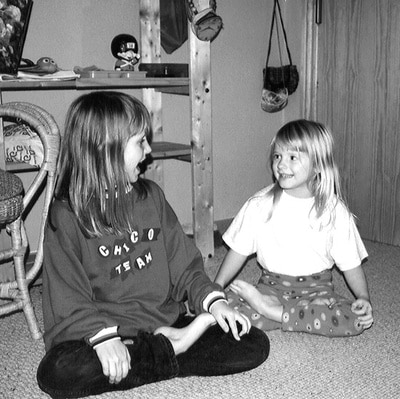 The following medical survey took place in 1975 under the direction of the Indian doctor, Professor Salgar. Her research team compared a group of people who, over a six-months period, were sitting in the Lotus pose daily (without using any kind of additional meditation or relaxation technique), to another group, who over the same length of time, followed a traditional fitness training programme with weight lifting, spring expanders etc. A third group of people, who were not doing any such activity, constituted the control group.

The researcher determined, for one thing, that the oxygen in the body was better utilised in the Lotus pose. Before and after the six-months period, all participants were exposed to a fitness test. As one might expect, the physical fitness training group obtained a clearly improved efficiency; but so did, surprisingly enough, the group who had “only” been sitting in the Lotus pose.

Under a heavy load, which demanded great muscular strength, the physical fitness training group showed the best results. However, under normal strain, the Lotus group surpassed the physical fitness group. Even though there had been no actual muscle growth, the Lotus pose people were better able to make efficient use of their strength. The control group showed no changes whatsoever.

With her findings, Professor Salgar was able to show that merely sitting in the Lotus pose has a positive influence on the metabolism and on the overall body fitness, which was significantly improved.

What brought about such changes?

To place the body in such an unusual position, of course, is not done by accident and indicates that the ancient yogis possessed an accurate knowledge of the processes in the body, even though they did not use the modern terminology of medical science.

When crossing the legs in this way, the blood supply to the legs is decreased and redirected to the abdominal region. This increased flow of blood in the abdominal region is beneficial for the inner organs and improves the digestion. It can be recommended to people with nervous disorders that they sit in the Lotus pose. Furthermore, the nerves emanating from the coccyx and sacrum are also influenced. These nerves serve the whole abdomen, the intestines and the genitals.

The Nadis, the finer energy passages, also become activated through the special position of the legs. From the viewpoint of acupuncture, (where they also work with the energy flows, and call the Nadis Meridians), it has been described how Padmasana influences the stomach-, the gall bladder-, the spleen-, the kidney- and the liver-meridians, which again influence other body parts and organs.

The use of the Lotus pose is instrumental in bringing about a series of curative and health improving effects, when the energies of the body are fundamentally harmonised. The actual purpose of the pose, however, aims further – as an aid to spiritual absorption. 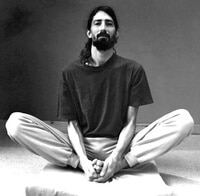 e, it comes easy to learn to use the Lotus pose – children for instance do it spontaneously while they play – whereas others need more practice. Do not try to force your body into the pose: as with any yoga posture, the body needs time to get used to it – the hips, the legs and the knee- and foot joints must be prepared and made supple in a systematic way. 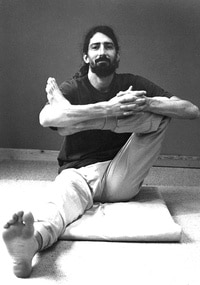 Refer to the second part of the program Air- and tension-releasing exercises, i.e. the Crow Walk, the Butterfly, the Pump etc. (for thorough guidance see Yoga, Tantra and Meditation in Daily Life p. 38-39). To sit in the Half Lotus is also a good preparation.

Don’t be alarmed if one day the soles of your feet are smiling at you from on top of your thighs.

Not only in India

It is common knowledge that the use of the Lotus pose in the Indian yoga tradition and in the Far East dates back a very long time. It is perhaps not so well-known that sculptures and rock-carvings of the Lotus and other poses have been found in the ancient cultures of Egypt, Mexico, Colombia and Scandinavia. The bronze sculpture on the following picture is of Celtic origin, and is one of two identical pieces as part of the handle of a “bucket” found on the ” Oseberg” Viking ship in the Oslo fiord in Norway. The picture to the right, is from the Cimbaya culture of Columbia.

Little is known about the kind of meditation that was in use in the pre-Columbian and northern cultures. The tradition in these and other cultures are, compared with the living tradition of India and China, less accessible. However, there is no doubt that the use of meditation once was world-wide. Swami Janakananda has, through more than 30 years of research,  discovered overwhelming evidence of the use of yoga and meditation in Central- and South America, dating back up to 5000 years. His work clearly shows that yoga does not have to be tied up with a specific mythology or religion. It is teachings of wisdom and a science in itself. 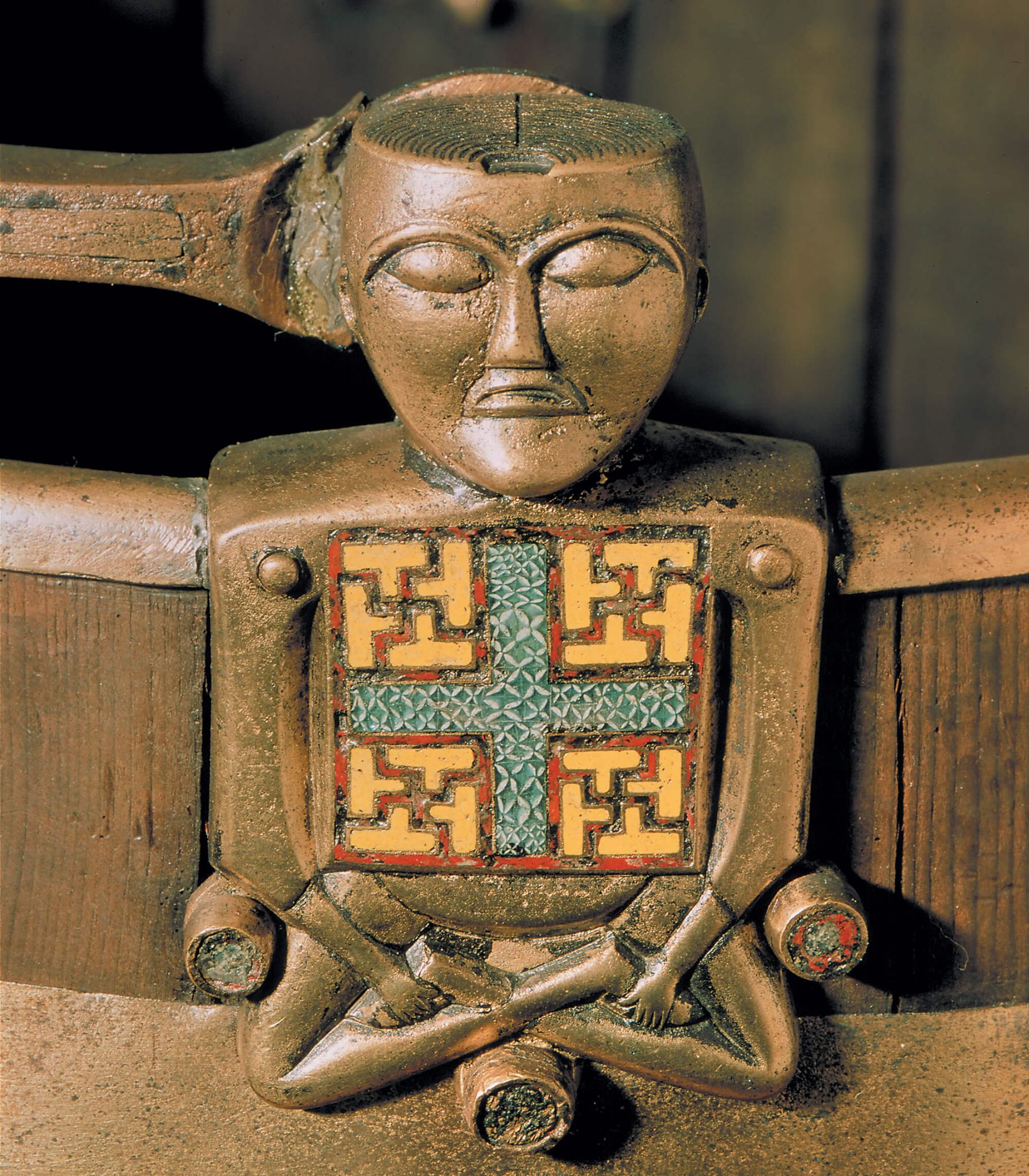