You can’t make the grass grow by pulling it

but the Earth is enriched when children do yoga

The above statement I heard at a conference in Paris, November 1994. The title of the conference was “Invent Tomorrow’s Education”. Yoga teachers, educators, school teachers, psychologists, researchers and others presented their visions and experiences for a more humane education for children and young people. There were three hundred participants from 14 countries.

The lectures covered a wide field, from very theoretical; for instance, there was half an hours account on the nature of silence, analysed from all angles and presented by a very loud lecturer; to concrete experiences with the use of yoga, relaxation and meditation methods in the classroom.

But – theoretical or practical – the general theme was a wish to introduce methods and ideas which make it possible to learn, to understand and to relate to the subjects which are taught, from the basis of oneself, with motivation, energy and joy. The driving force is not only that a certain curriculum should be learnt and that the teacher expects a specific outcome, but also that the children are not just stuffed with knowledge learnt by rote. One lecturer referred to a survey carried out in the French educational system, which showed that 95% of students felt stressed by school. 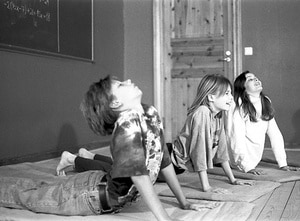 The organisers of the conference, R.Y.E. (Research on Yoga in Education) wrote in a presentation folder: “Teachers are asked to go through an ever more overloaded curriculum, but nothing is done to develop the memory. The children are told: ‘Now listen!’, but they are not taught how to concentrate.”

Lecturer Jacques de Coulon, yoga teacher and head master of a high-level secondary school in Switzerland: “There should be different levels within education. If you compare a human being with a stagecoach, then the actual coach is the physical body. The horses are the emotions and the coachman the intellect. It is obviously important that a close cooperation exists between the coachman and the horses. In the stagecoach, there is a traveller, and he is the spiritual level, and here we deal with the meaning of life, because the traveller knows the destination of the journey, he knows where he wants to go. You can have a coachman who can really control and direct the horses, but if he does not know where the traveller wants to go, he will just go round in circles. Education ought to develop all of these levels and promote the interaction between them. Yoga creates interaction between the physical level, emotions, intellect and the spiritual level. In the educational system in Switzerland, where I work, 90% of the disciplines belong on the intellectual level.”

Leading a workshop was Paula Gatti from Montevideo in Uruguay, where she is one of two yoga teachers employed in a school with 200 pupils. At the start of a school day, the whole school does a 10 minute relaxation or meditation and the same takes place at the end of the day – all 200 pupils at exactly the same time. All classes have two yoga lessons a week in a room used only for yoga. All other lessons start with a few minutes of silence. Either the pupils sit completely still with their eyes closed or – the smaller children – draw in silence. According to Paula, the teachers experience the pupils as far more motivated, they find more joy in the work and have a greater sense of solidarity, when compared to ordinary schools. The title of the workshop was “A happy school in Montevideo”.

R.Y.E. is originally a French organisation founded and run by Micheline Flak who is a student of Swami Satyananda. R.Y.E. has branches in many of the larger cities in France, as well as in five other countries, and aims to spread the use of yoga in schools and other educational facilities. One of R.Y.E.’s activities is to educate teachers, so that they become capable of using various physical exercises, breathing exercises and relaxation techniques in their teaching. The methods are modified so that the pupils either sit on or stand behind their chairs. A condition for taking part in the education is that you practise yoga regularly yourself.

At the Scandinavian Yoga and Meditation School, we often have contact with schools in the various countries where we work. We are visited by classes and we go out to the schools to make an introduction with both theory and a practise, where the pupils do not remain sitting on their chairs but get on to the floor and do an entire yoga programme, relaxation and meditation.

Some classes also choose to follow three lessons on three consecutive days, and in this manner they gain a clearer experience of how, for instance, they become better, through yoga, at directing their energy towards that which is important to them and how they can improve their ability to concentrate.

That a school teacher, in the middle of a lesson by means of simple exercises, is able to create attention and interest among the pupils is very valuable. The greatest benefit from doing yoga at school, though, in our opinion, is gained by combining the exercises mentioned above with actual yoga classes a few times a week, taught by a yoga teacher who has a comprehensive education. 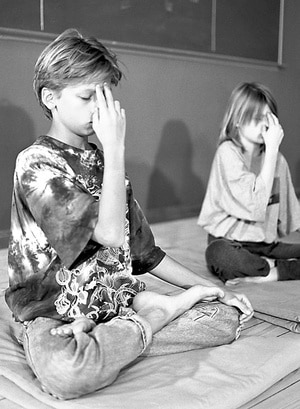 It is very inspiring and refreshing to teach groups of children or young people, because they have a natural curiosity and motivation to explore what happens when you do yoga. And the questions they ask are very honest and direct. If you study children you see that from birth they have an incredible ability – and sometimes from one second to the next – to change their state of consciousness. A child can be going at full speed until all of a sudden it becomes occupied with something and forgets everything around it. Who has not experienced, for example in a bus, a child who stares at you. A gaze that simply rests on you, uninterruptedly, without losing concentration for a single second, while you have looked away several times. One often experiences that children approach yoga in a very direct way, as if it is something they already know.

The relaxation Yoga Nidra is always very popular, also at our usual yoga classes for children. For about 20 minutes, they lie completely still with closed eyes and listen; Yoga Nidra is a relaxation where one is neither asked to relax, nor has to imagine that one is relaxed; the relaxed state is called forth by the technique. At the end of Yoga Nidra, one should see various images, and this is something children are both very fond of and do with no effort at all. At some schools, the tape with Yoga Nidra is used regularly in class, as a method of really taking a break and “wiping out the mental blackboard”, to offer the pupils an opportunity and time to digest all of the information and impressions they receive.

Yoga is a means of returning to being yourself, in the middle of the life you are living, so that again, you can experience, act – and learn.