– a yoga pose that regulates your body weight

Of course you can struggle to lose weight through aerobics, jogging and low-calorie diets, but you may just as well lose weight by standing still in a yoga pose. There is no need to think about your weight, if the body regulates itself.

Relaxation and well-being are not the only effects of yoga…

Yoga differs from, for example, gymnastics by not just aiming at toning the muscles. The exercises and poses of yoga also directly regulate and stimulate the body’s finer functions like the heart, the blood vessels, the nervous system and the glands.

When you practise yoga, the blood circulation is increased and the internal organs are massaged. Autonomous muscle functions, such as the peristaltic movements, are relaxed and brought into balance. The excretion of waste products is accelerated and the glands, which produce the hormones of the body, are stimulated. By vitalising the internal organs and the hormonal glands, you give the body a chance to find its own balance, whereby, among other things, it is able to regulate its own weight.

The yoga pose, the Plough

The yoga pose shown above is called the Plough (Halasana).
Lying on the back, you lift the straight legs up and over the body and let them hang by their own weight until the toes rest on the floor above the head. You go as far into the pose as you can without forcing the body and you remain in it for some time. In the beginning, you may feel that the body resists, but if you allow yourself to experience any tension, you will gradually calm down in the pose. The longer you stay in the Plough, the more the muscles relax.

It is not about effort or ideals of suppleness, it is a process which first and foremost frees tensions and brings the body into harmony.

You will find a full description of the Plough in the book, Yoga, Tantra and Meditation in Daily Life by Swami Janakananda, latest edition 2015: Here, the Plough is also seen in context with other poses; and you learn to stimulate a certain chakra in the Plough.

Physically, the upper part of the body is inverted at the same time as it is, so to speak, folded. In this manner, muscles, organs and glands are massaged with a certain pressure, while the back is stretched. Through this influence, the activity in the pancreas and the adrenal glands is increased. In these glands, the hormones: insulin, glucagon and cortisol are produced; they play an important role in the metabolism. Insulin is necessary for the cell’s ability to absorb nourishment in the form of blood sugar. But insulin also promotes the storing of fat, while other hormones like cortisol and glucagon are in charge of the breaking down of fat.

In an experiment, carried out in 1975, at The Institute of Medical Science in Benares, Dr. K. N. Udupa investigated the effects of the Plough on the hormonal glands and the metabolism:

The biochemical changes showed the usual trend with predominant increase in plasma cortisol (hormone in the blood which regulates the metabolism),17-hydroxycorticosteroids (metabolic hormone) and 17-ketosteroids (hormones for aggression and sexual urge). Plasma catecholamines (blood pressure and stress) were decreased.“

In the report, Dr. K.N. Udupa concludes that the Plough stimulates the hormonal activity of the glands, and that it is these physiological changes which are responsible for the body regulating itself towards an ideal weight.

The study also shows that the physiological effects of the Plough are not limited to the metabolism. As seen from the quotation above, the pose also regulates the production of substances which deal with stress, as well as other hormones essential for a fit body.

With people suffering from diabetes, the pancreas produces either too little or no insulin at all. As the Plough ( Halasana) increases the activity in the pancreas, this yoga pose can be of great help, particularly to people with maturity-onset diabetes.

At The Scandinavian Yoga and Meditation School (and especially at Haa Retreat Center in south Sweden where the intensive retreats take place), we have had some experience with people with diabetes, and as a result, many have benefited from yoga and meditation over the years.

A 35-year old man from Oslo suffering from diabetes discovered, to his great surprise, that by staying in the Plough some minutes every day, he was able to regulate his blood sugar. In the beginning, he therefore had to be careful not to take too much artificial insulin, as he had now started to produce more insulin himself. Gradually, however, he got to know the effects of the Plough so well that, with the help of this pose, he was able to stabilise the blood sugar. He then needed much less and at times no artificial supplement of insulin at all.

For most diabetics, though, it is not sufficient with one yoga pose. They use different exercises which supplement each other, for example: cleansing of the intestines ( Shankprakshalana), a sequence of yoga poses, one or two breathing exercises, a relaxation and meditation. This gives the most profound and lasting effect.

Yoga brings your whole being into balance 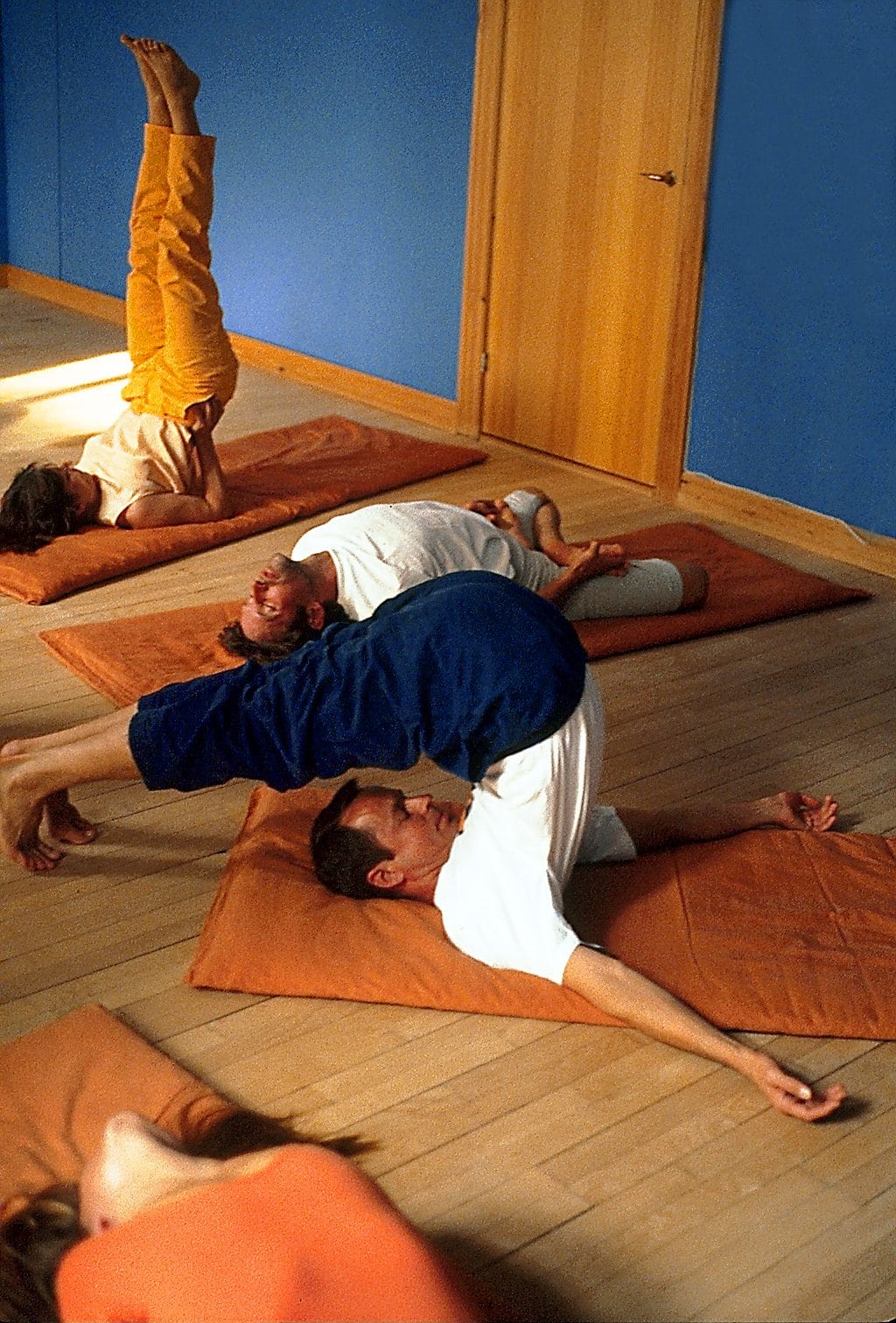 The co-operation between the various parts of the body is co-ordinated by the mid-brain via the spinal cord:

“…this close interaction between the central nervous system and the hormonal glands, which is brought about by the hypothalamus, is the explanation why states of mind, stress etc. can influence the bodily functions and the health of the organism.“
(Lademann’s Medical Encyclopaedia, 1977).

When you use yoga, this interaction between body and mind is utilised. Therefore, the effects of, for example, the yoga poses are not just experienced physically. By re-establishing the harmony of the body, the yoga poses also effect the mind – and bring your whole being into equilibrium.

In the 20th century, much research has been carried out on the influence of yoga on body and mind. The effects of the Plough on the hormones and the body weight is just one example.

In another article, we discuss the Shoulderstand (Sarvangasana), also called “The Candle”. In this pose, the body stands vertical and straight resting on the shoulders and supported by the hands on the back. In the “classical programme” of yoga poses, it is performed right before the Plough.